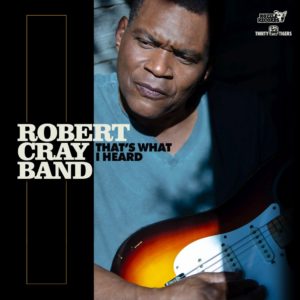 One of my favorite albums perhaps of all time was released one year ago today. No, I’m not referring to my album, In The Meantime, although it is my favorite album in my own catalogue. I discovered Robert Cray’s 2020 album, That’s What I Heard, sometime last spring and spent many enjoyable hours listening to his sweet planky guitar sounds and velvet voice mixed with a bit of grit. Then I blew my own mind when I read that the release date was the same date as the release of my new album. I know being enamored about this is a bit childish but, honestly, to have any little thing slightly in common with an artist like Robert Cray is a big deal to me as he is one of my favorite artists of all time.

I was lucky enough to have seen Robert Cray live in concert when I was about 15 or 16 years old at the Paolo Soleri Amphitheater in Santa Fe, New Mexico. It was an epic and storied venue which at that time hosted the best concerts every summer. Concert going at this venue was very formative in my musical life and throughout my teenage years I had seen B.B. King, Buddy Guy, Sheryl Crowe, Blues Traveler, Yes, Los Lobos, Dave Matthews Band, Indigo Girls, some random guy with the moniker “Jude” who killed it as an openning act, Corey Harris, Dr. John, Steel Pulse, and many others at the Paolo Soleri Amphitheater.

The night I saw Robert Cray it was during his tour promoting the release of his album “Shame and a Sin”.  Naturally, I bought a concert T-Shirt that night which I subsequently wore to shreds over the years as it had become one of my favorite T-Shirts. I actually didn’t end up listening to the album, Shame and a Sin, till many years later but really liked it when I finally did and it has also become one of my favorites.

I’ve been hooked on Robert Cray’s classic and yet fresh sound and style since I was a teenager. Take a listen to Cray’s latest album, That’s What I Heard, which was produced by drummer/producer Steve Jordan and hear for yourself. My favorite track is “My Baby Likes To Boogaloo” which was written and released by Don Gardner in 1966. Cray’s version is an infectious groove backed by drummer Steve Jordan that carries on the spirit of the original. Steve Jordan’s drumming really makes this album something special in addition to Cray’s prowess. It’s definitely my favorite work of Jordan’s since his work on John Mayer Trio and Keith Richards’ Crosseyed Heart.