I always wanted this.  You know, to pursue a dream.  From the first time I heard Chuck Berry on my dad’s Chevy stereo on our way to kindergarten that dream was to be a musician.  I didn’t really know what it was that I was listening to or what work was involved to do it, but I was fascinated with what I heard.

I started taking guitar lessons when I was seven and by the time I was thirteen I was actually playing some Rock and Roll.  My teacher and I would sit and listen to records and we would copy the guitar parts.   I went to concerts whenever I had the chance.  Usually, it would be my parents or some other adult figure who would take me to see whoever might be touring through town. 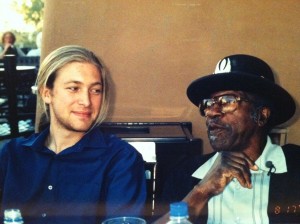 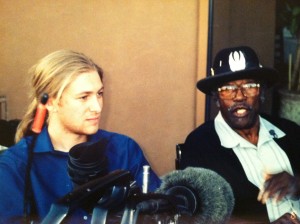 One of my most vivid memories was my parents taking me to see Bo Diddley at Club Alegria in Santa Fe, New Mexico around 1994.  The opening band for the night was a New York transplant to Santa Fe called Jono Manson and The Mighty Revelators.  They had an unrivaled bluesy soulful roots rock sound.  The harmonica player of the group was Thomas “Blues” Uhde.  He drove the band into the stratosphere in such a way that made the ticket price of this concert a joke of a good deal.  After all, Bo Diddley had not even taken the stage and we were getting this incredible show.  After their set I landed directly in front of the stage and managed to occupy a a little piece of real estate for dancing all night; dancing to the Bo Diddley beat.  For a thirteen year old kid with rock and roll dreams it was a pivotal evening.

A few years later I decided to record my first album.  I was only seventeen and had been performing at open mic nights and various bars around Santa Fe and Albuquerque when I caught the eye of none other than the same Thomas Blues who I had seen play years earlier with Bo Diddley.  We began playing together as a duo and when I recorded my album I hired the same backing band that Jono Manson had that night; the Might Revelators.

After a few more years of performing around the southwest and putting out another album, I had the opportunity to fill the role that I saw Jono Manson occupy that night at the Club Alegria.  I opened for Bo Diddley and played as his backing band at Sandia Casino Amphitheatre and again at the historic Lensic Theatre in Santa Fe.

Bo Diddley and my band had a short ten minute sound check and rehearsal.  I realized pretty quickly that the true reason for the “rehearsal” was so that he could scope us out.  After a few minutes of jamming and taking limited direction from him he looked at me and said, “Ok, I’m not worried now.”  It was a fun moment… A moment of validation not found in an article or album review but from a true pioneer of rock and roll.  A moment that was shared just between us.

I suppose that what I’m saying is that this musical ride keeps evolving.  I’ve had amazing opportunities to perform with artists that have inspired me like Thomas Blues, The Mighty Revelators, and Bo Diddley.  Later down the road I was fortunate to have the opportunity to open for artists like Etta James, Bonnie Raitt, and Otis Taylor.

I am committed to continuing this musical journey and make the most genuine music possible for listeners, concert goers, and aspiring musicians.  You are a huge role in all of this.  Your support and enthusiasm is what drives this machine and makes it possible for artists like me to put out new music and perform shows.  I’m excited for what is to come and I hope we experience it together.  If you want to enjoy some of my recent work from my performances this past summer click here for some awesome free video.

Thank you for enjoying my music and helping to make my dream a reality.